Traveling through a new lens 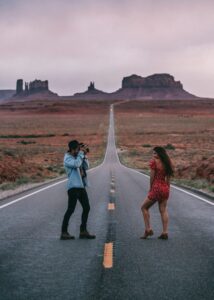 The pair stops outside Monu­ment Valley for a photo op on a 2020 road trip. Photo by Amy Seder

Five years ago, Ventura County natives Amy Seder and Brandon Burkley realized they were working to travel, so instead, they decided to travel for work.

In creating Away Lands, a commercial pho­tography and film business, the now 34-year-old Santa Monica residents were able to reclaim their lives and see the world through a new lens.

“Some people think travel is unnecessary or selfish when really it is such a vital part of what makes life worth living,” Amy says. “To be with people and be creative and be in beautiful places—that part of it makes the rest of it all worth it.”

Though they both grew up in Ventura, when Amy and Brandon met in 2011 they were living nearly 3,000 miles away from their hometown in New York.

Amy was working in photo production and Brandon in finance.

As they fell in love with each other, they also discovered they had a shared lifelong love of be­ing behind the camera.

They started recording their vacations on vid­eo, and the happiness those experiences brought them helped them realize how badly they wanted to escape their nine-to-fives. 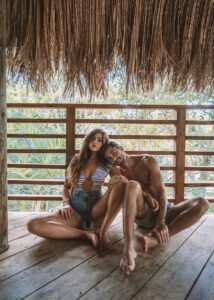 “I wasn’t being creative: I was working to help other people make their vision come true,” Amy says. “(Videography) gave me something else to do and focus on and be passionate about again.”

Brandon credits Amy with inspiring him to take his life in a different direction.

“(Finance) was a path my parents sent me down, and I wasn’t thinking too far into what Brandon wanted,” he says. “(Videography) was something that was lost in my life until I started traveling with Amy.”

So in 2016 they decided to make a change. They quit their jobs to travel the world, creating films and photos and ultimately their own busi­ness, Away Lands.

Driven by a desire to share beauty, they never looked back.

“I fell in love with video because of its ability to tell a story,” Brandon says. “I was able to put this montage of our life together for travel, and now it’s not just us but other people’s stories.” 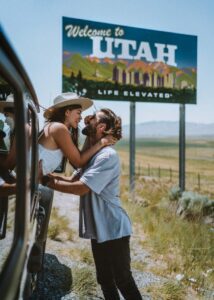 Driving across the Utah state border in 2021. Photo by Amy Seder

When someone sets eyes on one of her pho­tos, Amy hopes they appreciate the real, raw mo­ment she preserved as well as the sense of fan­tasy she brought to life.

“The two things that I’ve really pursued in my life were being on camera and being behind the camera, so the fact that I get the chance to do both feels like I made up my own dream job,” she says.

Their curated visuals garnered a combined reach of 275,000 Instagram followers—something they never anticipated.

“I am very thankful for social media and its ability to have gotten my and Amy’s work out there,” Brandon says. “But when we started Away Lands, we didn’t set off to create these amazing social media accounts.”

Their true focus has always been directing and shooting larger projects for outside compa­nies, like their commercial for Hard Rock Hotels in the summer of 2019, where they found them­selves on a yacht in Los Cabos. The sense of ac­complishment from that project is something they say they won’t soon forget. 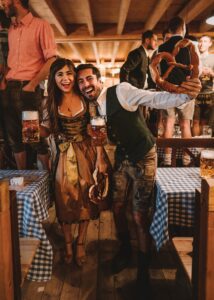 “Everything we wanted and saw the vision for in preproduction came true,” Brandon says. “We realized how much fun we were having, how well everything was coming together and how we were doing exactly what we always wanted to do.”

In 2018, Away Lands put together a promo­tional video series for Visit Ventura.

As enticing Ventura locations flash across the screen, Brandon’s voice confirms the video’s purpose: “This is our home, we want to share it with you.”

Though their career may look glamorous from the outside, the couple say, it is far from easy.

They’ve faced scams, wildfires, rejection and long hours—but through it all Amy makes an effort to be open and honest about her experiences. 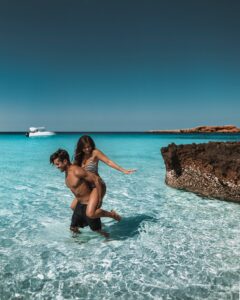 Above, Amy and Brandon visit the Day­maniyat Islands Nature Reserve in Oman in 2019. Photo by Amy Seder

“People want to see a real human, and I think it makes the work more interesting when you know a little about the struggle behind it,” she says.

Perhaps the greatest struggle of all, espe­cially as a travel-based company, has been the pandemic.

“It was absolutely devastating,” Amy says. “Overnight, we lost a life-changing amount of money in contracts, and it’s still hard to travel.”

The couple also had to postpone their dream wedding.

To supplement their income, Amy and Brandon developed an online Photoshop course. They also began planning more spontaneous adventures in response to the ever-evolving guidelines.

They agree that, like traveling, few things in life go perfectly or as planned. As challenging as the past two years have been, Amy and Brandon have learned the importance of embracing change.

“If you really want to get out there and travel and see the world, it’s not easy. It’s hard, and you’re constantly having to deal with change,” Brandon says. “Amy and I have always kept an open mind.”

Amy and Brandon’s Top 5 Ventura County Recommendations: A lot of food and a little fashion, these are the couple’s most-loved local destinations.

Amy recommends the fish tacos while Brandon recommends the fish and shrimp burrito. But their No. 1 pick is the hot sauce. “When I was living in NYC, I would buy about eight bottles of their Caribbean Blaze hot sauce to put in my suitcase,” Amy says. “We make sure to have it in our fridge at all times.”

A curated collection of California-inspired clothes, swimwear and home decor, Tiki Girl is Amy’s most loved boutique in the area. “I never leave empty-handed,” she says.

With high-quality beer and an engaging atmosphere, Topa Topa’s taprooms are among Amy and Brandon’s favorite spots to catch up with friends.

The couple enjoyed the Central American restaurant so much that they held their engagement party there. Both the indoor and outdoor sections of the gastropub are beautiful, they say, and they always make the most of the happy hour deals.